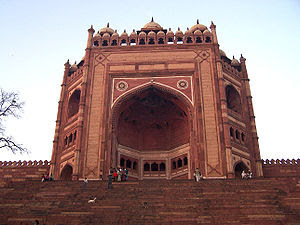 Buland Darwaza meaning ‘high’ or ‘great’ gate in Persian, is the largest of gateways in the world. It is located in Fatehpur Sikri which is located 43 km away from Agra, India. It is also known as the “Gate of Magnificence”. The gigantic gateway Buland Darwaza or the Lofty Gate looms over the courtyard of the mosque. It was built by Akbar following his victory in battle in 1573 – when Gujarat fell to him. The walled city of Fatehpur Sikri is dominated by this stupendous structure.

Buland Darwaza erected in 1602 AD as Akbar won over Deccan. The gateway is approached by 42 steps. The Buland Darwaza is 53.63m high and 35 meters wide. Buland Darwaza is the highest gateway in the world and an astounding example of the Mughal architecture. It is built of red sandstone and inlaying of white marble. It is semi octagonal in plan and two smaller triple-storeyed wings on either side. The Buland Darwaza towers above the courtyard of the mosque. There are thirteen smaller domed kiosks on the roof, stylized battlement and small turrets and inlay work of white and black marble. On the outside a long flight of steps sweeps down the hill giving the gateway additional height.

Calligraphic inscriptions from the Quran on its front and pillars and chattris at the top makes the Buland Darwaza a truly impressive sight. Another interesting feature of this magnificent gateway is the inscription etched on it, “The World is but a bridge, pass over but build no houses on it.” Attributed to Jesus Christ, this inscription speaks volumes of Emperor Akbar’s famed religious tolerance.

This exquisite architectural wonder is really an eye catching view for travelers and tourists, which is visible even from a long distance.