City Palace can rightly claim to be the pride of Udaipur. Towering over the magical, Lake Pichola, the beauty of City Palace is one that inspires the spectator. With a part of the palace complex serving as a museum and another part converted into a heritage hotel, the erstwhile royal palace now gladly welcomes more common visitors.

The City Palace of Udaipur is one of the most remarkable constructions of the Rajput rulers of Rajasthan. Located in the heart of the city of Udaipur and towering over the Lake Pichola, the City Palace unfailingly infuses a sense of awe in the hearts of its onlookers. It is the standing testimony of Rajput passion for art and architecture despite the fact that the exterior is not as elegant as the interiors.The original construction of the palace was pioneered by Maharana Udai Singh of the Sisodia clan soon after he founded the city of Udaipur. Subsequent Maharanas added their own structures within the palace complex later, but interestingly there is no sign of any inconsistency in the overall appearance. Infact, the entire City Palace complex exudes a beautiful harmony and uniformity in its construction work.

The old part of the palace complex today serves as a museum that stores the legacy of the Rajput rulers for the visitors. Two of the newer portion of the palace have been converted into hotels.

Inside the City Palace 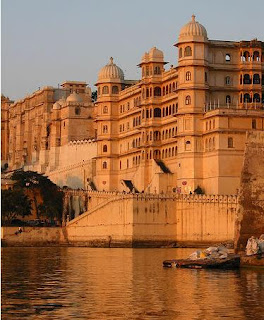 The City Palace architecture reflects a wonderful blend of the European and Chinese archtecture. The palaces, courtyards and gardens inside the palace have all a distinctive charm of their own, though together they create even grander scene for the visitors.

Built of granite and marble, the City Palace is entered through the Hati Polor the Elephant Gate. The Bada Pol and the Tripoli Gate follow soon. The Tripolia Gate is the same place where the the kings weighed themselves in gold and silver which was later distributed amongst the common people. This was a very popular customs in those days.

Crossing the Tripolia Gate, a courtyard is entered where in earlier days elephant fights were staged. Within the palace complex there is

Suraj Gokhada from where the king addressed a large number of his people, primarily during crisis. A beautiful palace, Moti Mahal, is breathtakingly beautiful with its exquisite mirror work. The name of the palace itself is an indication of the beauty that lies in store for the visitors.

The main part of the palace complex today serves as the museum. Very close to the main entrance is a section where the armouries including the deadly two pronged sword is on display. The Mor Chowk has beautiful glass mosaics of peacocks set in wall highlighting three different seasons : summer, winter and monsoon. The Krishna Vilas has an amazing assemblage of paintings that showcases the varying events & moods of the life of Maharanas like during a royal procession, festivals and games. The Manak Mahal is yet another fantastic part of the City Palace complex where crystal and porcelain figures mesmerise the visitors.

Bhim Vilas Palace has beautiful paintings of Radha and Krishna adorning its walls while the Zenana Mahal has beautiful frescoes as well as wall paintings to make it appear attractive. There is also the Dilkhush Mahal with similar charming interiors.

The Chini Chitrashala exudes a classic beauty with its Chinese and Dutch ornamental tiles while the Sheesh Mahal beams with thousands of sparkling pieces of mirrors. The Laxmi Vilas Chowk is an art gallery showcasing a marvellous collection of Mewar paintings.

The Amar Vilas is definitely not to be missed as it has beautiful hanging gardens with fountains, towers and te
rraces. From here, views of the Lake Pichola and the city of Udaipur itself is hugely magnificent.

The Shiv Niwas Palace and the Fateh Prakash Palace have ben converted into luxury hotels. The Crystal Gallery at the Fateh Prakash Palace Hotel is a delight for everyone since it houses a rare collection of Oslers crystal items. Maharaja Sajjan Singh ordered these items from England, however, unfortunately he never lived to see his dream of possesing these exquisite pieces of work becoming true. After, his death, the crystal items, for long, remained in a store till the time they were finally brought out and displayed in the Fateh Prakash Crystal Gallery.