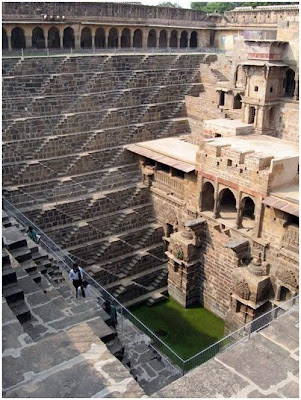 In the village Abhaneri near Jaipur in Rajasthan, state of India you can find Chand Baori, a famous step well of the world. Chand Baori was built in 9th century by the King Raja Chand . This main features of the Chand Baori step well are

Abhaneri is a small town village, situated at a distance of 95 km from Jaipur, on Jaipur-Agra road. The place is popular for the amazing ‘Baoris’ (step wells) and Harshat Mata Temple. Originally Abhaneri was named as Abha Nagri, which means the city of brightness, but due to mispronunciation of the term, it is changed to the present name.The village Abhaneri is believed to be built by the King Raja Chand and at present this city has many ruins of past. Temple of goddess is also present adjacent to the Chand Baori step well and is one of the attraction for tourists visiting Rajasthan.

Abhaneri is prominent for ‘Baoris’, which are the unique invention of the natives for harvesting rain water. Amongst the other step wells, Chand Baori is the most popular one. The huge tank with delicate carvings is certainly delightful to the eyes.

These big tanks were used as cool places of resort and water reservoir in parched days. It was a ritual to wash hands and feet before visiting the temple. Adjoining the Chand Baori, there is a temple, dedicated to Harshat Mata. This temple serves as the other tourist attraction of Abhaneri. Raised during the 10th century, the wrecks of the temple still boast of the architectural and sculptural styles of ancient India.

Legends say that ghosts build it in one night and that it has so many steps to make it impossible for someone to retrieve a coin once it’s been dropped in the well.

Varanasi – oldest city of the world