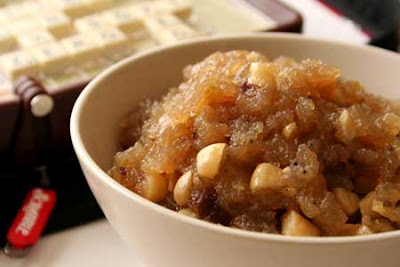 Wheat Halwa Recipe has been presented to you by MyIndianGuide.com. Food, tasty food…The way to a man’s heart is through his stomach…An army marches on its stomach….and so many other cliches that all center around one of life’s necessities – eating. Our aim is to ensure you a truly unique and unforgettable culinary experience. We combine the ancient with the modern and take you down the path to losing yourself in the exotic recipes of INDIA. That is why this Wheat Halwa recipes have been given here.

Add 1 cup of water and jaggery to a pan. Heat and bring to boil. Stir till jaggery dissolves. Take off fire and Keep aside. In another thick bottomed pan, add ghee and dalia. Keep stirring for 2-3 minutes till an aroma rises from dalia.
Add the remaining 1 1/2 cups of water. Mix and cover. Cook till the water has been absorbed. This may take for 4-5 minutes.
Put the dissolved jaggery water over dalia. Mix well. Cover and cook for another 2-3 minutes till all the water are absorbed and dalia is fully cooked. Add more water if needed.
When dalia is fully cooked, add the chopped dry fruits and cardamom powder. Mix and off the flame.
Keep covered till serving time. Serve hot.
——————————

Wheat Halwa is a tasty Indian dish and cooking it is quite easy.  India is well-known for its tradition of vegetarianism which has a history spanning more than two millenia. The anti-meat eating sentiment was already felt at the end of the Vedic period. This period also saw the rise of Buddhisln and Jainism, the founders of which abhorred the practice of sacrificing and consuming the flesh of animals, preaching the principle of ahimsa or ”non-harming”. To win back these converts into their fold, the Hindu priests advocated against killing, their public appeal beginning around the Ist century BC. They embraced ahimsa and followed a vegetarian diet, regarding it as superior to the Brahminical ideas of sacrifice.

A typical North-Indian meal would consist of chapatis or rotis (unleavened bread baked on a griddle) or parathas (unleavened bread fried on a griddle), rice and an assortment of accessories like dals, fried vegetables, curries, curd, chutney, and pickles. For dessert one could choose from the wide array of sweetmeats from Bengal like rasagulla, sandesh, rasamalai and gulab-jamuns. North Indian desserts are very similar in taste as they are derived from a milk pudding or rice base and are usually soaked in syrup. Kheer a form of rice pudding, shahi tukra or bread pudding and kulfi, a nutty ice-cream are other common northern desserts. Wheat Halwa recipe is quite popular dish in India.

Most Indian cuisines are related by similiar usage of spices. Often, Indian food cooking is distinguished by the use of a larger variety of vegetables than many other well-known cuisines. Within these recognizable similarities, there is an enormous variety of local styles.

In the north and the west, Kashmiri and Mughlai cuisines show strong central Asian influences. Through the medium of Mughlai food, this influence has propagated into many regional kitchens. To the east, the Bengali and Assamese styles shade off into the cuisines of East Asia. Wheat Halwa recipe for you … Tasty Cooking ! From MyIndianGuide.com

South Indian food is largely non-greasy, roasted and steamed. Rice is the staple diet and forms the basis of every meal. It is usually served with sambhar, rasam (a thin soup), dry and curried vegetables and a curd preparation called pachadi. Coconut is an important ingredient in all South Indian Recipes . The South Indian dosa (rice pancakes), idli (steamed rice cakes) and vada, which is made of fermented rice and dal, are now popular throughout the country. The popular dishes from Kerala are appams (a rice pancake) and thick stews. Desserts from the south include the Mysore pak and the creamy payasum.