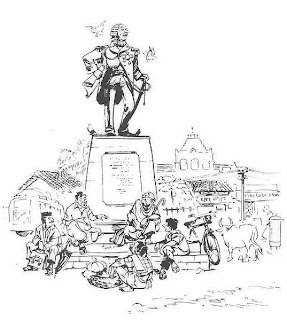 Malgudi Days is a collection of short stories by R.K. Narayan that focused on the trial and tribulations of a small Indian town of Malgudi. R. K. Narayan (October 10, 1906 – May 13, 2001), was one of India’s greatest English language novelists, known for his works based in the fictional town of Malgudi. According to R.K. Narayan, Malgudi is a town “habited by timeless characters who could be living anywhere in the world” and is located on the banks of river Sarayu and surrounded by the Mempi Hills.

The series “Malgudi Days” was directed by the late Kannada actor and director, Shankar Nag in 1987, and was shot entirely near Agumbe in Shimoga District, Karnataka. The music was rendered by L. Vaidyanathan and was produced by T.S. Narasimhan of the Padam Rag Films. It included many of Narayan’s short stories and novels such as Swami and Friends and The Vendor of Sweets.

“Malgudi – the fictional semi-urban town” was one of Narayan’s greatest achievements. R.K. Narayan also got award for this. He created the town in September 1930, on Vijayadashami, an auspicious day to start new efforts and thus chosen for him by his grandmother.  He first saw a railway station, and slowly the name Malgudi came to him. The town of Mysore where R.K. Narayan lived has influenced him a lot to write this stories as we can see the flavour of the city in each story. The town was created with an impeccable historical record, dating to the Ramayana days when it was noted that Lord Rama passed through the town; it was also said that the Buddha visited. While Narayan never created strict physical constraints for the town, he allowed it to form shape with events in the various stories, becoming a reference point for the future.

Vendor Of Sweets narrated the story of a sweet vendor, Jagan, his business and confrontation with his son who had returned from abroad. The title role was played by Kannada actor, Anant Nag.

Swami and Friends revolves around ten-year old Swaminathan, or Swami as he is known by other characters. Swami portrays the growing pangs of a boy who despises school, as he makes excuses and roams around Malgudi with his friends. Swami’s father works in a government office and his mother is a housewife. At home, Swami shares his adventures with his aged granny, who lovingly addresses him as “Chamy.” Swami also has two close friends; Mani and the son of the Police Chief Superintendent, Rajam. Swami’s char
acter was enacted By Manjunath, a regular feature in many of Shankar Nag directed movies.

In 2004, the project was revived with film-maker Kavitha Lankesh replacing the late Shankar Nag as director. The new series was telecast from April 26, 2006 on Doordarshan.