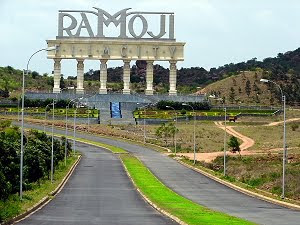 The largest integrated film production complex is the Ramoji Film City in Hyderabad which opened in 1996 with 47 sound stages. It is also a popular tourism and recreation centre, containing both natural and artificial attractions including an amusement park. It is situated near Hayathnagar and Peddamberpet on Hyderabad – Vijayawada, NH9 highway, about 25 km South-East of Hyderabad.

Spread over an picturesque 2,500 acres and studded with hills, woods, lakes and striking architecture, it provides camera equipment, set construction, properties, costumes, audio post production, digital post-production / SFX and film processing. Guinness World Records certifies Ramoji Film City as the World’s Largest Film Studio Complex. Twenty international films and forty Indian films can be produced simultaneously in the complex. It has attracted not only filmmakers from the country, but also producers from around the world including Hollywood.

It is also a popular tourist attraction as there are top class facilities to promote tourism. A Japanese garden, the ETV planet (a multi-purpose editing suit), a pool, artificial waterfalls, breathtakingly accurate airport terminal, hospital set, railway station, churches, mosques and temples, shopping plazas, palace interiors, chateaus, rural complexes, urban dwellings, and a winding highway are some other places for tourists to visit. The Film City even has honeymoon packages for the newly married couples who are on the lookout for a getaway destination. It caters to the corporate world by offering banquet halls.

For shopping enthusiasts, there are nice handicrafts, pottery and other decorative articles for purchase. Magadha, Meena Bazaar, Frontierland or Black Cat Warehouse are a few avenues from where the visitors can carry home souvenirs of their visit. This Film city has also ‘Ramoji Film Magic’ which shows about the behing-the-scene activities involved in movie making.