Search for the real Guru

admin September 16, 2011
I have had many people ask me whether I have a guru, whether I have been initiated, and whether I have had spiritually uplifting experiences. While I can sense their curiosity, it has not been very easy to answer these questions. I understand that we all want to know “the path”, we want to learn it fast and we are not ready to be careful about treading this path. There is hunger to want to know, in some people its a lot more intense.

I have been initiated into Shiva worship in the traditional Brahmanical order. While having studied quite a few of the influential paths of Shaivism, namely the cults of Aghories, Tantriks and Virashaivas I have come to understand them as a whole as well as individually. I respect them and their methods though I might not necessarily take to the path myself until that Sadhana is a must for my own salvation with no other alternative. There are disturbing elements in each of these paths when observed in their unadulterated potency and its for our mind to accept the ways of the world or reject it and face repercussions both good or bad.

But Sadhana typically starts with the initiation from a Guru. They say we shouldn’t search for him but he will come on his own to us. Well, does the waiting get tough then? That’s probably the time we resort to following self proclaimed Gurus in today’s world and hope to find peace in their teachings. What’s missing in such cases is the personal attention we want in these cases. What we don’t realize is, when we are not “ready” the Guru will never come. Preparation for a Guru is most important to get started.

The first Guru we come in contact with in our lifetimes are our parents. They set the ball rolling giving us insight into the prescribed path that we would most probably take through our lives and seldom change it. And hence the first initiation has begun. There is no ritual in particular except for the male child maybe. Our search for the next Guru begins when we come to the age of understanding life. We want to dive deeper and understand the science better, of what is possible within our capacity.

The typical route from here is the confused path of ritual worship – a disciplined methodology of dos and don’t with no reasoning to explain why. While on one side the heart encourages this, the mind looks for logical reasoning which might not be immediately apparent. The questions arise and sure enough they don’t have convincing answers. Do we at this point hang on to the path or change or give up and look for the undefined universal God?

In my opinion understanding ritual worship is like learning a language. We don’t understand the nuances of grammar or the idiosyncrasies, yet we hold on to it hoping we will make good masters of it some day. We do not reject language because we didn’t attempt to learn it.

In my personal experience and understanding, at this stage its good to hold on to ritual worship and follow it consistently even if we don’t understand it initially. Its up to us to read up and dig deep to understand what we are doing, rather than doing it mechanically and feel like a parrot reciting mantra. We most often expect someone else to teach us the meaning and do not find a reasonable Guru to explain this vast science; we have little time to do this on our own.

If we do this right, there is a good chance of attaining a spiritual high at this point, reaching a level of sublime experience with the supreme in a small way and getting enchanted by the turn of events in our lives. This is probably the time we are taking to prepare ourselves for the Guru’s arrival into our lives. Following the ritual path is a must to go to the next step, but it is effective only when we approach it with Bhakti rather than mechanical action with no comprehension of what we are doing.

The next misconception is that the Guru will show up in human form and speak to us in a language we speak in. Thats where we make the biggest mistake. The first criteria of eligibility towards getting a Guru, is that we in our individual capacity are prepared to be a pupil.

The true pupil has single pointed intense faith in a path with no room for deviation. This path is well understood by him/her and not a result of mass teaching of the community they belong to. At this stage, the pupil is ready to disassociate from the community [herd culture] and walk towards the lonely path of self realization. The pupil understands detachment as a reality, and though they might be in the midst of people, they move towards looking at them with detached compassion rather than possessive love and expectations. This feeling of course is not as overwhelming in the beginning as it is at the end of this path, but the pupil gets to feel the crux of what is expected. The pupil has now decided while living in the middle of this chaos, they don’t quite belong to it anymore and the journey towards understanding the inner self now becomes a breathing reality. The pupil is ready to surrender to the supreme force.

In the silence of their mind, in the void of their being and in complete surrender, the pupil awaits the arrival of the Guru. If luck has it, the Guru will be present in human form at that time. The gyana of the way ahead is mostly transmitted through touch or sight or in silence but never through speech as sound is a lesser path of communication. If the Guru is not physically present, the gyana is arrived at in the mind. It just happens, and the pupil is subconsciously directed by the power of the thoughts they harbor in the mind. This is when the pupil transitions from religion to spiritualism. From here on ritual has no value, it has led the pupil to the doors of the master.

The Guru appears in the subtle world of their mind to direct them and lead them in their path. The path is never easy and surely has no room for personal bias. It can test the pupil through tough times, with unhappy experiences to force the pupil to detach from what is around them or it could be through comfort as well. Either way, the pupil realizes that what is around them in the exterior world doesn’t matter any more – both good and bad. They have now learned to accept all the twists and turns in their lives.

One of the most mysterious forms of experiencing the presence of a Guru in a “non human form” is the sculptural depiction of Adi Shankaracharya at Kedarnath. While to most people it might have looked like a symbolic representation of his Dandam, this form of his hand holding the sacred symbol of the Shankara, is believed to appear in the mind’s eye when a pupil worships this Guru. 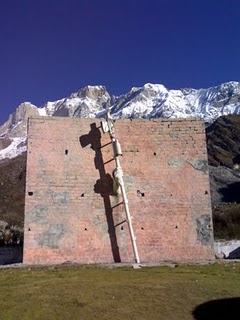 In this search for the supreme, when the Guru accepts us as an eligible pupil and the divine education begins, this experience is far more overwhelming than any other we may have experienced before in our lifetimes. It is potent, magical, and mysterious and strictly rule driven and supersedes all the scientific theories we have come across so far. This is a different reality, unexplored and excitable on a different plane. The Guru transforms into a God like being and leads the way, while we – the pupil – pick up the reins of Bhakti and ride on this path to supreme bliss.