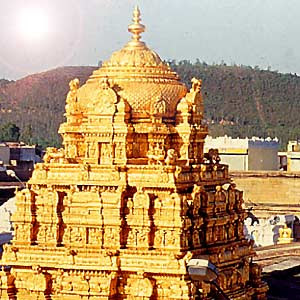 Tirumala Tirupati Temple is a famous Hindu Temple of Lord Venkateswara and is accredited for being the most visited temple of India and second most visited shrine in the world after Vetican. Considered as the most sacred and the richest temple in the world, Tirupati temple is situated in the town of Tirupati. It is located 67-km away from Chittoor in Chittoor district of southern Andhra Pradesh. The temple is built on the Venkatadri hill having an height of 853m (2,800ft.) above the sea level, one of the seven hills of Tirumala, and hence is also known as theTemple of Seven Hills. The presiding deity of the temple, Lord Venkateswara, is also known by other names – Balaji or Srinivasa or Perumal.

It attracts pilgrims from all over the country and it is not unusual for pilgrims to stand in line for hours together to obtain a glimpse of the presiding deity for a few fleeting seconds. The temple is visited by about 50,000 to 100,000 pilgrims daily, while on special occasions and festivals, like the annual Brahmotsavam, the number of pilgrims shoots up to 500,000, making it one of the most visited holy place in the world.

According to the legend, the temple has a self-manifested idol murti of Lord Vishnu, with the Lord believed to have resided here for the entire Kali Yuga.

The ancient Tirupati temple follows the Dravidian style of architecture. The gopuram of this temple is its highlight. The ‘Vimana’ or Cupola, named the “the Ananda Nilayam” is placed over the sanctum sanctorum. It completely veiled with gold plate. There are three ‘Prakarams’ or enclosures in the temple, among them the outermost enclosure boasts of the ‘Dhvajastambha’ or the banner post. The image of the temple deity represents both Lord Vishnu and Lord Shiva. Lord Vishnu is considered as the preserver whereas the Lord Shiva is considered as the destroyer in Hindu religion. 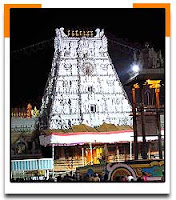 Pilgrims to the Tirupathi Temple donate their hair as a form of sacrifice. The 600 barbers employed by the temple shave the pilgrims’ heads 24 hours a day and more than $6 million dollars a year is raised through the auction of the hair. The popularity of the temple can be judged by the annual budget which was estimated at Rs 10 billion in 2008 with almost everything coming directly from donations. Devotees give donations which runs into millions.

Depicting the Indian legacy, Tirupati Balaji Temple is really significant from the religious point of view. Every year, the popularity of this temple attracts tourists from all over the world. Sri Venkateswara is a benefactor of boons in the Dark Age and people come here to seek the blessings from the Lord.